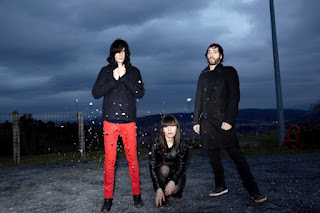 As a music fan, one mistake that I am still prone to making is to base my feelings on a band by how they are used to describe others. Take the Rolling Stones for example. Stones-eque rock seems to be used as a short-hand for blues inspired rock & roll with sexually suggestive lyrics, and as such was used as a criticism for Primal Scream's "Give in But Don't Give Out" album. It's because of this, as well as my general apathy for the Stones' songs that I have been familiar with, like "Brown Sugar" and "Jumpin' Jack Flash", that I never really took much interest in them. However, in the last few months, I've started to re-assess their back catalogue, and realised that I had not been fair enough to them. Songs like "She's a Rainbow" and "Fool to Cry" reveal a much richer variety to their sound than I have previously given them credit for, and show that sometimes it is unfair to jump to conclusions about some artists.

Which brings me on to Capsula, the Argentinian born but Spanish based trio. Their latest single, "Hit & Miss", has a sound that could easily have been categorised as Rolling Stones-eque blues-rock suggestiveness. Yet this would be both unfair to both Capsula and to Jagger & co, so it is probably best to judge the song on its own merit. Which is fair enough, as "Hit & Miss" is a finely tuned rock number, complete with wailing guitar lines and interesting boy/girl vocal harmonies.

"Hit and Miss" is taken from their album "In the Land of Silver Souls", which is out now.