Asylums - I've Seen Your Face in a Music Magazine 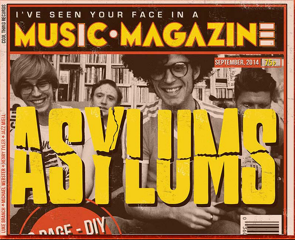 Who would have thought that such great rock music could come from a band from Southend-On-Sea? David Rowntree-approved 4-piece Asylums are about to support The Vaselines on a couple of dates next month, and preceding that they are releasing a new single, "I've Seen Your Face In a Music Magazine." The song is a sub-150 second blast of spunky goodness, combining elements of Britpop and 90s American rock to create something both in-your-face, and yet decidedly irresistible.

"I've Seen Your Face in a Music Magazine" will be released on October 27th.