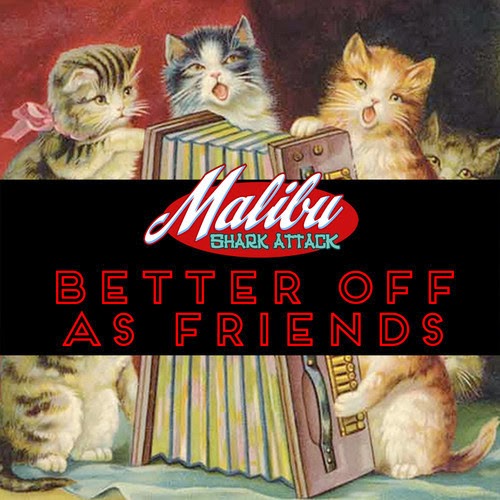 Don't you just hate it when your favourite bands split and splinter?

Self-referential "post-new wave-prog-electronic-indiecore-synthpop" is the order of the day for Malibu Shark Attack, a band made up of Belfast super-producer Rocky O'Reilly and Atlanta rapper Tribe One. Their new single "Better Off As Friends" features a guest appearance from The Dudley Corporation, sees Tribe One rapping about the dissolution of the band's previous musical endeavors, whilst trying to win over fans who are still hung up on their split, over Rocky's fizzy electro-pop production. The single has already picked up a few admirers, with Steve Lamacq loving it so much that he played it twice in a row on 6music, so it should hopefully win over those people who still haven't got over the end of Oppenheimer.

"Better Off As Friends" by Malibu Shark Attack will be released on 17th March, with their self-titled debut album to be released in May.

Posted by Christopher McBride at 10:07