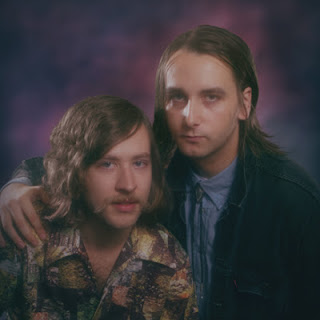 Portland based duo Wampire sure are a difficult band to categorize. They are signed to Polyvinyl, the same label as last year's breakout group Japandroids, they emerged from the same scene as Unknown Mortal Orchestra, and seem to have an image which evokes the 70s (from the picture above, it appears that one of them is Bill Oddie circa The Goodies, whilst the other has taken fashion tips from John Cazale's character from Dog Day Afternoon), yet on hearing their new single, it would appear that none of these things have had an effect on their sound.

"The Hearse" seems to have more in common with the indie-pop of DIIV, with its dreamy guitar lines, pulsating basslines, and vocals that appear to be recorded in a different universe to the rest of the track. It's a strong introduction to a group who seem likely to be total blog darlings by the end of 2013.

"The Hearse" will be released on March 5th, with their debut album "Curiosity" due for release in May.

Email ThisBlogThis!Share to TwitterShare to FacebookShare to Pinterest
Labels: Portland