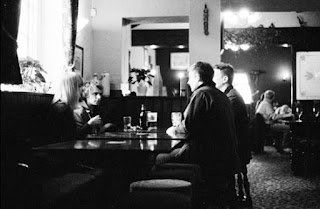 Leeds seems to be the gift that keeps on giving, musically at least. The latest group from the city to pop onto my radar is indie-pop upstarts Just Handshakes. Since forming at university several years ago, the band have gone on to support such groups as Mystery Jets and Pete & The Pirates, played the Indietracks Festival, and released an E.P as a cassette, something which is increasingly becoming shorthand for "quirky C86 inspired indie-pop."

Their latest single "London Bound" is a decent introduction to the band's sound, albeit one that is apparently darker than much of their previous material. Dreamy guitars, honeyed vocals & a knack for a great pop chorus places the track somewhere between Kirsty MacColl, Allo Darlin' and The Pains of Being Pure At Heart.

"London Bound" will be released as a free download on February 18th, and will feature on their debut album "Say It."

Posted by Christopher McBride at 13:36