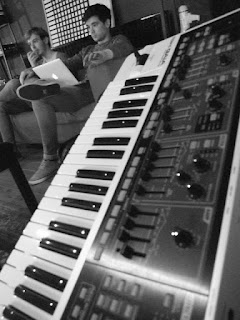 All things considered, it looks like 2013 is shaping up rather nicely for Belfast quartet Hologram. Having released two great singles at the tail-end of last year, the group have really come into their own as a live act, with their gig in Auntie Annies last month really blowing me away.

As if things weren't already going swimmingly for them, they have announced that the group will have a track featured on this year's Brit Awards soundtrack, which will see the group (officially credited on the album as Hologram & Paul Shevlin) finding themselves alongside such luminaries as Bruce Springsteen, Muse, The Killers and, um, LMFAO. Can't have it all, I guess.

Recording at the legendary Abbey Road studio, "Summer's Song" is slightly more melancholic and less anthemic than their previous singles, yet still wonderfully engaging as usual. Paul knows his way around a great piano-pop tune, and his vocals haven't sounded this good in quite a while. Hopefully the song's exposure should gain the group a following on the other side of the pond.

"Summer's Song" will feature on the "Brit Awards 2013" album, which is released 11th February.