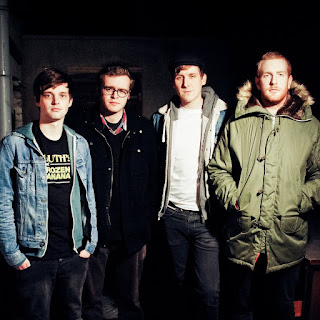 Belfast quartet Empty Lungs have been slowly building their reputation locally as a capable pair of hands to support touring rock groups. In the past year, they've enjoyed well-received support slots in the city for The Subways, Beans on Toast and Japandroids. But like all groups aiming for worldwide fame, there comes a point when they need to step out of their shadow and make a name for themselves on their own terms. And what better way to set out their stall than a brand new six track E.P?

Produced by Rocky O'Reilly, the closest the north has to a super-producer, "Stand Up" could be best described as heavy pop-punk. Tracks such as the short, snappy opener "Running In Circles" and "Release The Lifeboats" do a good job of updating the Northern Irish punk sound that once produced The Undertones, Rudi & Stiff Little Fingers to a 21st century audience.

The title track is how one would imagine Green Day might sound like had they grown up in Stranmillis rather than California, whilst the obvious highlight of the E.P is "Until The Day We Die." It's obvious from the song that the group took a few pointers from Japandroids during their supporting stint, as it has many of the qualities that make that group so attractive - loud guitars, strong rock hooks, and a chorus that you just want to shout along to. The only real misstep on the E.P is "Long Road Home", which unsurprisingly is also its slowest song.

Empty Lungs are a band who seem enamored of Northern Ireland's rock culture and subsequently put their own spin on it, one which deserves to fight its way out of this province and reach a worldwide audience. Hopefully "Stand Up" will be the release that helps them make that first step.

"Stand Up E.P" is available to buy now.