The Android Angel - Her Shoulders 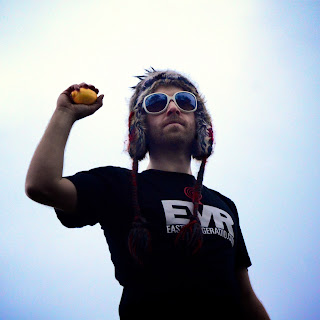 The Android Angel is the alter-ego on Surrey-based musician Paul Caltofeanu, who is probably better known for the bonkers-pop he creates under the Free Swim moniker, including the wonderfully bizarre "Smell of Pregnancy."

Following on from last month's "Chicago John", the 2nd song to be taken from his upcoming album, "Her Shoulders", has premiered online. Like the rest of the songs released under this name, it was written in 2011 whilst travelling around Romania, Ukraine & Hungary, and sees Paul sounding slightly more serious than his Free Swim material. The song, which mixes organ sounds with spacey sounds and relaxed acoustic guitar, calls to mind songs from Spiritualized's "Ladies and Gentlemen" album.

"Her Shoulders" is taken from The Android Angel's debut album "Lie Back And Think of England", which will be released later in 2013.

Posted by Christopher McBride at 09:52