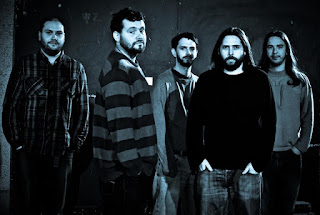 It's been absolutely lovely to hear one of Derry's finest radio presenters, Stephen McCauley, hosting a week-long show on BBC 6music, standing in for Gideon Coe. His Electric Mainline show on BBC Radio Foyle has been instrumental in giving a lot of local and alternative artists their first break. He was one of the first DJs to play SOAK, for example, and is also a fan of one of this blog's favourite new artists, Public Service Broadcasting.

It's great to hear that he has continued his support of Northern Irish musicians on his 6music show. One of the songs that he spun on the show was "Quare & Technical", the latest single from Mudbitch, a rock quintet from Coalisland in County Tyrone. The band sound like a lo-fi version of fellow Nordie hard-rockers Therapy?, although whether that's down to an aesthetic choice or due to recording limitations is something which remains to be seen.

So good luck to Stephen McCauley for the rest of his week's stint at 6music. Hopefully many more people discover some great new music through his influence.

"Quare & Technical" is out now on a pay what you like basis.