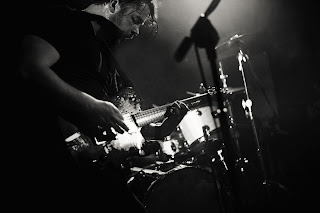 It been far too long, Amidships. After falling in love with their "Friendly Fire" E.P back at the blog's inception, I'd had high hopes that the Northern Irish group would explode in 2012, even going so far as to place them on my list of local tips. Sadly, no new material was forthcoming, although they have done well as a live act during that time, supporting Frightened Rabbit and playing a well-received set at the Glasgowbury Festival.

After such a long wait, the band have finally announced the release of some new material, due for release next month. The double A-side single sees the band both revisiting the sound that piqued many peoples' interest in the first place, as well as furthering their sound into new territories. "Forever More" is more in line with the material on their "Friendly Fire" release, with their slow building alternative rock soundscapes exploding into Band of Horses-esque cataclysmics near the song's conclusion.

"Lost" on the other hand, is a completely different beast indeed. The song still maintains the deep anthemics that has become their trademark, yet take things into more upbeat territory. Echoes of LCD Soundsystem and Phoenix esque indietronica work hand-in-hand with distorted guitars and strings, making for the band's catchiest single to date. Hopefully there won't be a such a long wait for song more new material from the group.

"Lost/Forever Here" will be released on March 1st.


Posted by Christopher McBride at 15:10