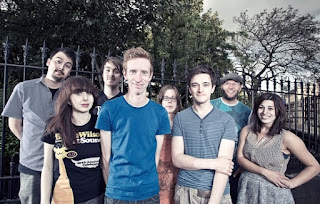 Like many bloggers, Glasgow based octet Randolph's Leap first sprang to my attention when they were something of a surprise inclusion on the Blog Sound of 2013 longlist, most likely aided by the Scottish contingent. That boost gained them a lot more admirers, especially as the band found themselves amongst 6music's most blogged UK artists of 2012.

Building on this support, the group have released their first single of 2013, and whilst one might expect a band to release something grandiose and attention-seeking to build on their publicity, Randolph's Leap have seemingly done the opposite by releasing "News", a song that clocks in at the 77 second mark. It's a charming little folksy indie-pop ditty about not being able to spend time with the person you adore. It makes great use of brass instruments, with the end result sounding like a Mumford & Sons track that you don't feel the need to mutter under your breath.

"News" is out to download now, and is available to buy as a limited edition mug single.


Posted by Christopher McBride at 18:15