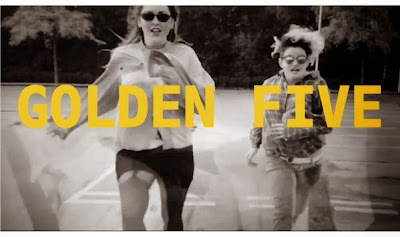 We've been waiting for this moment for a long time.

After expressing our desire that it would happen for some time, Wonder Villains have finally decided to release the fantastic, exuberant, stupendous, gloryriffic, bloody brilliant "Golden Five" as a single. Or a focus track. Or whatever you call a post-album, non physical release of a tune in the dark, post-CD dominated world that we now live in. But regardless, now everything Wonder Villain-y is now centred around this glorious, Metronomy-meets-"Boys Don't Cry" pop song for the time being, and we for one could not be happier.

And even better, the band have just released a new music video to accompany its release, and it should come as no surprise that it's well worth watching. The 'plot' of the video seems to follow Eimear and Cheylene as they try to find their band mates Ryan and Kieran, but in reality it's just an excuse to watch the gang get up to silly things for 3 1/2 minutes. When they finally get around to giving Wonder Villains their own Miami 7-esque TV show, they might have just found their opening credits.

"Golden Five" is taken from their debut album "Rocky", which we implore you to purchase right now.

Posted by Christopher McBride at 19:16