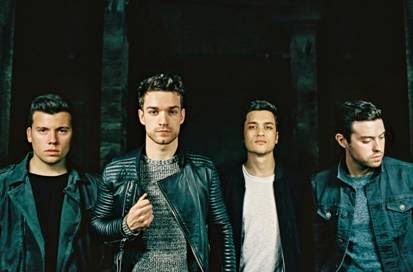 Here's a band that seem to have been doing well for themselves recently. London based pop-rock dreamboats* Twin Wild have picked up fans in AlunaGeorge and You Me At Six recently, as well as being invited to support Young Guns on tour. Their last single, "Fears", has so far picked up over 280,000 streams on Soundcloud, which in scientific terms, is described as a 'ruddy boat-load'. The band are gearing up for the release of a new single next month, which is going to be released just in time for the band to be contenders for the Christmas #1 slot.

Although realistically they've got no hope of competing with the likes of Band Aid redux, Tom Odell or whatever mannequin wins this year's X Factor for the coveted slot (or even charting at all), it's definitely worth giving yours a little piece of "Another Stranger". It's not hard to see why they count Young Guns and YM@6 among their admirers, as they share a similar rock-but-not-rock blueprint that make those those bands so beloved among the teen crowd. It's also got a little bit of a Klaxons vibe to it, albeit with less rave-y vibe overall.

Twin Wild definitely have the potential to build a decent sized fanbase over the next few months, and "Another Stranger" should put them in good stead for their future development.

"Another Stranger" will be released on December 14th.

*I mean seriously, look at that press picture. They sure are a photogenic lot.
Posted by Christopher McBride at 19:30