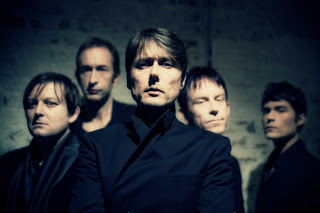 Ring the bells, and let the joyous news be spread - Suede have released their first single in ten years!

Ever since the band regrouped in 2010 following an extended hiatus, the question that has been on the lips of Suede fans has been whether the group would be releasing any new material following their reformation. At first it seemed rather unlikely, as the group took to the road to promote re-issues of their five studio albums, including three night residencies in both London and Dublin, where they played their first three albums in full. However, the group maintained that they wouldn't resort to treading on past glories alone, so 2012 saw the band take to the studio to record what will eventually be their their sixth album which will be titled "Bloodsports".

And now, the band have brought out "Barriers", the first new material the quintet have released since their 2003 singles collection. Even better, they've made it available as a free download. And it's a wonderful entry to the Suede catalog. It is a song that doesn't sound like it would fit neatly onto any of the band's current albums, yet neither does it sound like the band attempting to refashion their sound to suit the mores of 2013, although it does appear to have taken a few cues from lead singer Brett Anderson's recent "Black Rainbows" album.

Ladies and gentlemen, Suede are back. Enjoy it while you can.


Posted by Christopher McBride at 23:26