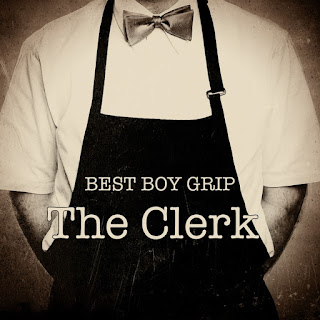 It's been just over a year since Eoin O'Callaghan, aka Best Boy Grip released his debut E.P "Barbara", which introduced the world to his charming piano-pop style. Since then, they've picked up consistant airplay locally and played to increasingly receptive audiences, including a well-received set at the Glasgowbury Festival. And if that wasn't enough, one of their songs was chosen as the introduction music for the UTV weather, and there's not many people who can claim to introduce Frank Mitchell* every night.

Best Boy Grip's second E.P, "The Clerk", is one which sees O'Callaghan developing the group's sound further, adding new instruments and structures, all whilst keeping the charm that made them such a delightful proposition in the first place. That's not to say there's a few curveballs thrown in - the first 6 seconds of the title track gives the impression that a David Guetta-esque club banger is imminent. Thankfully, this is something of a red herring, with the track itself being a great piano-led tune with great brass arrangements and subtle switches between 4/4 and 3/4.

Elsewhere of the E.P, "Postman" has a real Supertramp vibe to it, whilst the subtle, stripped-back arrangement of "Aim" shows the group at its most fragile and delicate. In contrast, the final track on the E.P, "Sun Lotion", sees Best Boy Grip at its most vibrant - with a driving rhythm dominating the final half of the track. Whether the lyrical nod to fellow Derry lads The Undertones on that song was intentional or not remains to be seen.

"The Clerk E.P" is a worthy sophomore release for Best Boy Grip. Although nothing on the E.P comes close to matching the pop perfection of "Barbara", it acts as a good representation of the evolution of their sound, and is one that will make any future release for them a must-have.

"The Clerk E.P" is available to buy now.


*For those not from Northern Ireland, think Michael Fish with a love of town-based riddles.
Posted by Christopher McBride at 19:36