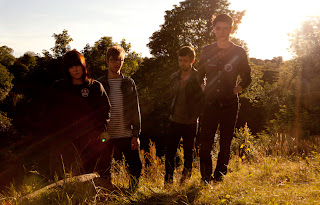 In the 18 months since the blog last visited Newcastle based group Retriever, the band have shaken things up a little. They have abandoned ol' Echo and expanded to a four-piece with the introduction of a live drummer (Fintan Dawson, formerly of fellow Geordies Cult Image). With a new release with the updated line-up forthcoming, the group have made their first song, "Come On", available as a free download.

Whilst the song is lighter than some of their previous material, it still finds itself in dark territory, like the difference between Night Jewels and Rum Caramel on the Dulux Colour Chart. With the similar sounding Savages being tipped for big things in 2013, the Siouxie-inspired Retriver could see their music receive a much more appreciative audience over the next few months.

"Come On" is taken from the group's upcoming E.P, which is due for release in the spring.

Posted by Christopher McBride at 21:54

Email ThisBlogThis!Share to TwitterShare to FacebookShare to Pinterest
Labels: newcastle