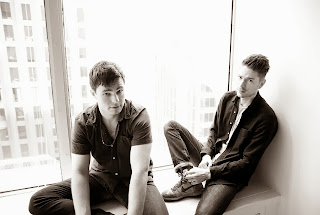 One of the things about being a blog that tends to focus on new music is that because the artists are normally at the very beginning of their careers, usually with their first song or release, some groups only get featured once, barely referenced later on in the blog, if at all, like Roy from the Poochie episode of The Simpsons. This could happen for many reasons - the band might have split up, moved into different groups, or just started making music that did not float The Metaphorical Boat.

Last summer, this blog featured a song by unsigned Brooklyn duo Junior Prom. Their single "A Little Time" was a great slice of Friendly Fires-esque indie-dance, and we hoped that it would be the start of something brilliant. However, as the months went on, and no new material was forthcoming, it seemed as if the band had called time on their career prematurely, and this blog continued pursuing the music of other upcoming artists.

That was until this month, when I was informed that not only is Junior Prom still a going concern, but a) they had just signed to Eleckra Records (a subsidiary of one of the three major worldwide record labels), and b) they have a new single out, "Sheila Put The Knife Down". The sweary single sounds as if it was created by putting Jagwar Mar, New Order and Phoenix in a blender, then used the grinding noise of the food processor as the basis for the condiment that the musical dish is served with. That is to say, it's a thoroughly enjoyable indie-dance song with a real bite.