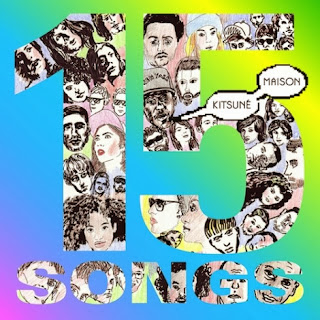 As far as record labels go, there's not many out there that can compete on coolness and hipness with French label Kitsuné. Having launched in 2002, its output is just as likely to be sold in Urban Outfitters as it is in your local record store, and to date label has put out acclaimed records by artists such as Is Tropical and Digitalism.

However, the label is perhaps best known for its relationship with Two Door Cinema Club. The appearance of "Something Good Can Work" on their incredibly popular "Kitsuné Maison 7" compilation album in 2009 is credited with introducing the band to a wider audience, with the 2 subsequent studio albums they recorded on the label turning them into global superstars. TDCC have now flown the coop and signed to Parlophone, but the release of their latest compilation album, "Kitsuné Maison 15", shows that the label still has the ability to scout out potential future superstars.

And rather excitingly, on this compilation Kitsuné have seemingly decided to fill the TDCC-sized hole by putting a fellow Northern Irish band on the tracklist. Having noted last year that their song "Voices" had a bit of the French touch to it, Belfast band Go Wolf have earned a place on "Kitsuné Maison 15" with a re-recorded version of that song. The song's as funky and gloriously uplifting as ever, and if the positive blog reception it has received in the past few weeks is anything to go by, it could be the start of Go Wolf's very own journey to international stardom.

A few other acts who've previously appeared on this blog pop up on "Kitsuné Maison 15". Judi Dench's favourite band, Years & Years, contribute "Traps", which as we've noted before, is a song that goes from artsy to dancey within the space of 3 minutes. Hotly tipped Brighton group The Wytches feature on the bonus track with the acoustic "Summer Again", which unfortunately is nowhere near the high standard the band had set themselves with "Beehive Queen".

In terms of highlights, aside from aforementioned "Voices" and "Traps", the most enjoyable tunes on the album are "Deezy Daisy" by Portland, which is the sort of irresistible dance-pop song that Groove Armada only wish they were still capable of making, and the wonderful "Scared" from Swedes Nonono, a song that Portishead might have recorded had they been aiming for the dancefloor instead of the dinner party.

"Kitsuné Maison 15" should easily serve its aim at introducing new and eclectic artists across a range of genres, placing them firmly on the lips of music lovers for the foreseeable future. As a result, expect to hear a lot more from Antimatter People, Dillon Cooper, and, here's hoping, Go Wolf over the next year.