Hurdles - Where To Start E.P 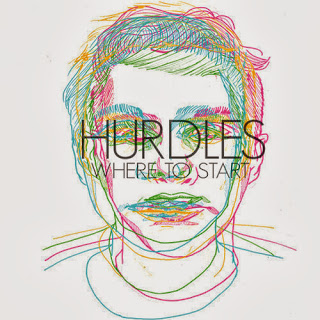 Belfast based 4-piece Hurdles caught a lot of us off guard in May when they released the single "Kaleidoscope" without much fanfare. Thanks to its infectious nature, the song slowly became a favourite with lots of people both locally and further afield (including plays on Radio 1 and the lovely Steve Lamacq Show on 6music), leading to the band playing the main stage at Glasgowbury despite being a going concern for less than nine months. The band have now released the follow-up to that song, the brand new five track E.P "Where To Start", a release which should cement their reputation as one of the most irresistible indie-pop groups in Northern Ireland.

Following on from the short introductory track, the title song sets the stage for the record's sound - highly danceable guitar orientated pop will a real spring in its step. The majority of songs on the E.P follow this pattern. Focus track "Control", which is by far the E.P's strongest track, shows off the band's knack for catchy  Phoenix-esque bangers with simple yet effective choruses, whilst closing track "Ruthless" is an enjoyable tune based around a guitar riff not to dissimilar from "Undercover Martyn" by TDCC. "Roadrunner" slows down the pace a little bit, taking their indie-pop sound and adding some subtle glockenspiel and a guitar outro which has a whiff of U2 about it.

Hurdles have claimed that "Where To Start" is a release that shows a progression in complexity in their sound. In all honesty it doesn't sound any more complex than what they've released in the past. However, that's not necessarily a bad thing. When the band have a real knack for writing enjoyable, indie-dance tunes, I don't think you necessarily need to add anything extra.

"Where To Start" by Hurdles will be released on October 10th. They launch the E.P on the same day at The Speakeasy, Belfast, alongside fellow blog favourites Affleck and Go Swim.

Posted by Christopher McBride at 12:59