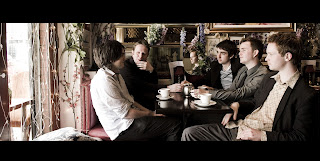 When I was drawing up my list of bands from Northern Ireland to watch out for in 2012, there was one band that almost made the list, but just missed out by a hairs breadth. That band were the Newry based quintet Elspeth. Now the band are lining up to release their debut album, and have released a track so good that it's making my regret my decision a little.

"Think Back", which is available as a free download, is a track that feels like a 3 1/2 minute crash course for those interested in learning about the grittier side of Britpop. There are elements of Longpigs, Geneva, Bluetones, and even little specks of Bends-era Radiohead thrown in for good measure. It's hardly re-inventing the wheel, but then again there's a reason why the wheel's remained the same for thousands of years - it works, plain and simple.

"Think Back" is taken from Elspeth's debut album "Coax", which will be released later this year.

Posted by Christopher McBride at 18:22