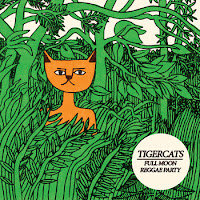 Let's be frank, who honesty could not love a delicious slice of freshly crafted indie-pop? (A. Goths. Goths could not). Our side of the Atlantic has quite a plethora of hot new indie-pop bands coming through the ranks at the moment, and the most recent band to come to my attention are London quintet Tigercats.

Following on from a few dates where the group played along blog favourites This Many Boyfriends and Allo' Darlin, the band have released their latest single into the wild, "Full Moon Reggae Party." Even though the title is slightly misleading (the track features no werewolves, or syncopated rhythms), the track is a quirky track that manages to be cute without falling into the twee trap. The video for the song is a rather stunning piece of psychedelic animation which has to be seen to be appreciated.


Posted by Christopher McBride at 23:57