All Is Beta - I Wanna Join Your Band 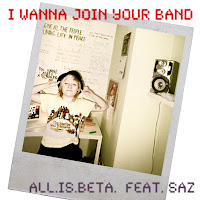 All to often, we are prone to seeing popstars try to prove how 'real' they really are, despite the fact that most of them are the product of tweaking and micromanagement by a committee of major label figures ever since they signed away their soul in the hopes of a few cover stories on a copy of Smash Hits.
Which brings us on to London based artist All Is Beta, a project that isn't ashamed of its pop credentials, or the transient nature of its single "I Wanna Join Your Band." A collaboration with German vocalist Saz, the two of them never met in person during the making of the record, apparently being content with making their sound "with a combination of Twitter, Dropbox, GarageBand and GoogleDocs." What they've created is a very likable electro-pop banger that's bound to get stuck in your head for hours.
"I Wanna Join Your Band" is released on Helix Music, and is available as a free download.
All Is Beta - I Wanna Join Your Band (feat. Saz) by helixmusic
Posted by Christopher McBride at 14:38