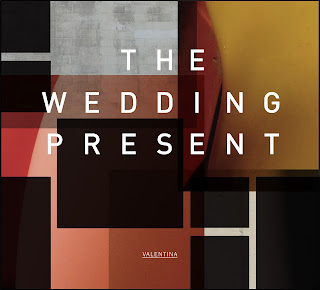 (Scopitones)
It’s strange to think that at one point The Wedding Present held the record for the most top 40 singles in a calendar year. Between January and December 1992, the band notched up a stunning 12 charting hits, a record that would not be beaten until 2004 (by Elvis Presley, no less). Now 20 years later, David Gedge & company are releasing their eighth studio album, “Valentina”, into a musical landscape where the band’s indie-pop template has been adopted by an onslaught of acts, from The Pains of Being Pure at Heart to The View. But in light of these young contenders to the crown, can The Wedding Present still remain engaging and relevant?
On the strength of “Valentina”, the answer is an overwhelming yes. The group have made what is perhaps their strongest album since their early 90s heyday, with the songs capturing the hope-inspied romanticism of David Gedge. The album kicks off with “You’re Dead”, a sprawling six minute opener that goes from out-and-out rocker to calming self-reflection over it’s running time. This is followed up by the biggest pop moment on the album, “You Jane”. The track sees Gedge take the lead as a neo-romantic crooner. “I’m Bogart, you’re Bacall”, he sings, whilst also comparing himself to Tarzan.
Many of the tracks feature the same template of hard-soft dynamics mixed David Gedge’s slightly sly delivery. However, some of the album’s best moments occur when the group abandon this formula and go into different territory. “The Girl From the Door” seems to be one of the most tender song on the album, there is a great lyrical dissonance, with Gedge proclaiming that “I’ve been using you all this time”, one of the darker moments on the album. “524 Fidelio”, an ode to a minor planet in the Milky Way, features an unusual time signature and a rather funky bassline, leading me to conclude that it would make a great, if left-field 2nd single from the album.
From a production point of view, “End Credits” is the most interesting song, with two drumkits being played in tandem without feeling either overwhelming or superfluous, making it one of the sole tracks on the album that is better suited to headphones than the stereo.
Whilst the album is rather good, it is far from being perfect. “Stop Thief”, the only real clunker on the album, never seems to get out of the starting gates, whilst I cannot understand the need for the 30 seconds of white noise at the end of the otherwise enjoyable “Back a Bit…Stop.” Perhaps it’s to waken up less attentive listeners? Still, these are minor quibbles in what is a largely solid album.
“Valentina” is an album that reminds us why so many of us fell in love with The Wedding Present in the first place. It may have been 20 years since the band were chart stalwarts, but that doesn’t mean that they are no longer relevant. “Valentina” is a love letter to those heady days viewed through 2012’s lenses, capturing what made the band so special and making it relevant for today’s music fans.
Highlights: “You Jane”, “524 Fidelio”, “End Credits”.