After spending the past 2 weeks looking back at the best releases of 2011, it is time for The Metaphorical Boat to look ahead to the bands that hopefully will be making waves in 2012.

The 10 acts that feature in the countdown are ones that have not yet released an album that I hope will make a mark in 2012. The first part will look at artists from Northern Ireland that I have high hopes for in the next 12 months, whilst part 2 will look at bands from the rest of the world. 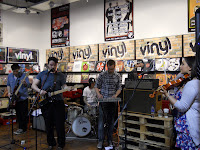 With their stadium-folk sound, Antrim sextet Amidships are a band of epic proportions. With a 7 track E.P under their belt ("Friendly Fire"), and an increasingly devoted live following, 2012 could see the group break into the consciousness of the UK music scene.

Rams’ Pocket Radio
Lisburn based piano-rock artist Peter McCauley, aka Rams' Pocket Radio, is an artist that has been on my radar for some time, ever since I heard the demo of "Dogs Run In Packs" back in 2009.

2011 has been his best year yet, with the support of 6music's Tom Robinson leading him to playing a storming Glastonbury set over the summer. The momentum has increased with the recent DRIP EP, showcasing the extent of the artist's power-piano style. With a new E.P planned for the new year, hopefully we'll be hearing a lot more of Rams' Pocket Radio in the new year.

Belfast based 5-piece Sons of Caliber ply their trade with their own brand of folk, full of guy/girl harmonies and poetic, heart-on-sleeve lyrics. In the past year they've developed as an intriguing live prospect, and tracks such as "My Way of Thinking" and "Falling For You" have shown their knack for writing memorable, pastoral tunes. With an E.P due in the new year, we should be hearing more from the band in the near future.

Belfast based heavy rock band Window Seats have been releasing singles for a few years now. But in the past few months their profile has increased after the release of their "Frozen Bones E.P", as well as the IMTV award nominated video for "Local Superhero." With tunes such as "Juliette's Letter" in their arsenal, the next 12 months should be an exciting time for the trio.

Their entire back catalogue is available to download for free from their Bandcamp page. 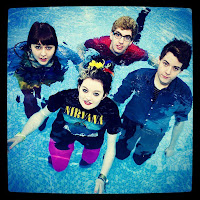 As I have mentioned on many occasions, I am a massive fan of the Derry four-piece's sugary pop sound. If there was a definition for "fun" in the pop dictionary (if such a dictionary existed), I'm sure you would find a picture of The Wonder Villains staring back at you. I mean, how many other artists do you know that use their Twitter feed to organize games of rounders? Not Radiohead, I can tell you that.

With the impending release of their second single "Ferrari", which features lyrics about swapping a sibling for a Charizard, amongst other things, things are looking rather rosy for the band. Let's just hope that we get a music video from the guys in the near future. If there's ever been a band whose songs are audio-visually friendly, it's The Wonder Villains.

Ferrari by The Wonder Villains
Posted by Christopher McBride at 15:00