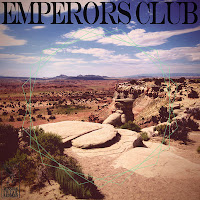 Within hours of Emperors Club making my list of bands to watch out for in 2012, the Iowa quintet released a new song that justifies my support for them.

"Sham Sham", which is available to download for free, continues the band's penchant for mixing American rock with British influences. A more laidback affair, the song mixes soulful Americana with influences from Arctic Monkeys' and soaring harmony vocals that Teenage Fanclub would kill for. Although the song doesn't have the immediacy, nor punch that "Our Time" had, it is a good song that opens the door to a varying sound for Emperors Club.

Posted by Christopher McBride at 14:07

Email ThisBlogThis!Share to TwitterShare to FacebookShare to Pinterest
Labels: americana, britpop, Tips for 2012