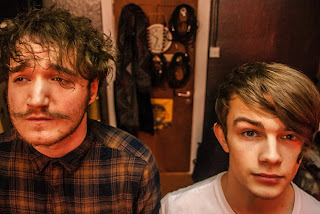 The members of Belfast duo WASPS (not to be confused with the similarly monikered American metal band) decided to form a band together when Danny McClelland (ex-Born Only Yesterday) and Charlie Cairns (formerly of Lost Avenue) realised that they both had tattoos of And So I Watch You From Afar, which anyone who has ever watched Tenacious D in The Pick of Destiny can tell you is the only way you are allowed to start a rock band.

They created an early buzz* with the single "Godzilla Is Dead", and they are following it up with "Future Endeavours", and from the sounds of it, they do wear the influences on their sleeves, both literally and metaphorically. There's the DNA of ASIWYFA throughout the song, with its intricate guitar playing and ever-shifting rhythms and time signatures, although its impassioned, emo vocals do allow it to be a good entry point for people who may find other math-rock to be a bit too inaccessible for them. It's a great song from a band whose music has a real sting** to it.

*I am not sorry. I am not sorry in the slightest.
**I apologize for nothing.
Posted by Christopher McBride at 19:51