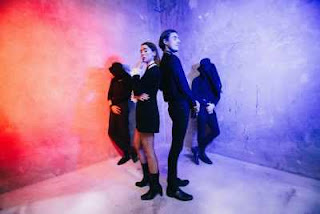 Normally, when we write about new songs and bands that we like on The Metaphorical Boat, we very much hope to see the band do very well, very quickly, and that the band in question end up becoming a much bigger deal over the coming months. However, for our own selfish reasons, there is a reason why we don't want band responsible for the song we are writing about today to become massive, at least for the next few months or so.

We'll get on to that later, but for now it's time to introduce to you the Australian four-piece Confidence Man. They've already captured hearts Down Under, being named a One To Watch by Triple J off the back of their single "Boyfriend (Repeat)". However, it is their latest single "Bubblegum", which came to our attention through our friend at Breaking More Waves, which has got us really excited indeed.

Why? Because it the kind of bonkers, hyperactive, cut & paste pop that we absolutely love to pieces. As well as calling to mind artists mentioned elsewhere, like The Go! Team, and Deee-Lite (it's been called by some as a modern-day updating of "Groove Is In The Heart), it also reminds us very much of The Asteroids Galaxy Tour in how its constituent parts slip and slide out as the song progresses. We are also convinced that the song's chorus samples "Hello" by fellow Antipodeans The Cat Empire, another pop song that we really love, although this is mere speculation on our part. It's a joyously fun song, and one that stands a fairly strong chance at being our #1 song come the close of 2017. We very rarely listen to songs on repeat, but "Bubblegum" is a very welcome exception.

So in spite of our love of "Bubblegum", why do we not want to see Confidence Man to hit the stratosphere in the short term? Simple - they're playing The Great Escape this year, and given how incredibly infectious their sound is, we're worried that if they get too big too soon, then we won't be able to get in to see them in Brighton in May. A bit selfish, we know, but when you've got a sound as fun as this, you really want to see it at the earliest possibly opportunity. So Confidence Man, if you do intend to becoming the biggest band in the world, could you possibly wait until around June time, pretty please? If you continue to grace us with boppers like "Bubblegum", there's a great chance it could happen.

"Bubblegum" is out now on Heavenly Recordings (the home of St Etienne & Hooton Tennis Club, among others)

Posted by Christopher McBride at 18:38