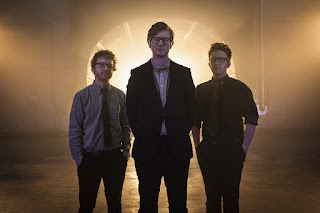 We have been fans of Public Service Broadcasting almost as long as this blog has been running, ever since we heard the multicoloured sounds of "Roygbiv" five years ago. Famed for their re-purposing of old vocal samples from public information films, the band have taken a somewhat niche concept and become a big deal off the back of it, with two albums that smashed right in to the albums chart (including one album, "The Race For Space", which has been certified Silver by the BPI), and selling out Brixton Academy. It's been a pleasure at The Metaphorical Boat watching the band going from humble beginnings into the stratosphere, and it has been a real pleasure to be able to write about it every step of the way.

The band are now gearing up for the release of their third album, which for the first time sees them expand into a trio, with JF Abraham joining the original core line-up of J Willgoose Esq. and Wrigglesworth (the latter of whom we really should have entered into our auto-correct by now). The first single to be taken from the album is "Progress", a song that for the first time in a PSB single, features a guest vocalist, with the main vocal hook being provided by Tracyanne Campbell of Camera Obscura (although this isn't the first PSB track to feature guest vocals, with "Valentina" from their previous album featuring Smoke Fairies).

As of yet, it is not clear what the theme is for the band's 3rd record, as the band claim that it is a "closely guarded secret", although based on "Progress", we have three potential theories.

1. This is going to be an album about Public Service Broadcasting - this is the least likely of our theories, but we're going to run with it anyway. The use of samples in "Progress" could be interpreted as being an updating of the operating statement from their first album track "Theme From PSB". Also, the use of the sample stating "These men look the same as they have always looked...but before your eyes they are changing" could be interpreted as a statement introducing JF Abraham as a full-time member to the band. However, as the band don't strike me as the sorts who would be into navel-gazing, this is very unlikely to be an album all about themselves.

2. The album is going to be about the assembly line, manufacturing, and/or Henry Ford - The song has a somewhat mechanical feel to it, with the use of vocoders leading to some comparisons to Kraftwerk, and given that the samples seem to reference the creation of machines, the idea that the album is centred around manufacturing seems to take shape.

Furthermore, as someone pointed out on Twitter earlier this week, "Why I Believe In Progress" is the title of a book by the forefather of the assembly line, Henry Ford, this theory gets a little bit stronger. We could even read into the colour of the single sleeve for the song and take it as a reference to the famous misquote from Ford about only selling cars that were black, but then we're probably taking this deeper than we intended it to go.

3. The album is going to be a political one - although Public Service Broadcasting's music to date hasn't been overtly political in tone, in the past year the band have been much more vocal about their own political leanings. As well as citing the Manic Street Preachers as an influence, the band recently played a gig for the Corbyn-affiliated People's Assembly, and J Willgoose has been a lot more vocal on Twitter on his own political leanings (and woe betide anyone who tries to tell him that musicians should shut up about politics). Giving the title has echoes calls to mind "progressiveness", perhaps this album could be an overview about the artist's political beliefs, or perhaps an album about the history of progressive politics, which given the current upheaval on the world stage, would make this quite timely.

Tangentially, before this track was announced, we had a feeling that the album would be about the European Union, although given that this track doesn't give any indication of this, German musical influences aside, we're going to bury this theory for the time being.

But whatever the third album happens to be about, we're just glad to see Public Service Broadcasting back, and we are confident we are going to really love what they have to offer.

"Progress" has an impact date of 5th May.