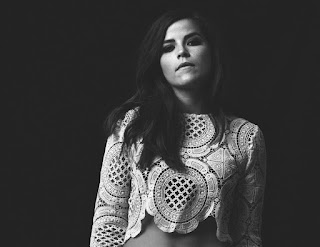 (Alternative title: "Why do I always discover great Australian musicians whilst queuing for sausages, Part 2")

So The Great Escape is well an truly over for another year, so if you wanted to see all the best new music coming through at the moment in one easy to navigate town, then you'll have to wait until May again for another opportunity. But that doesn't mean that there's still isn't music from the festival that we're yet to discover. There were some acts that we didn't come across until after they'd performed, whose music we've then come to enjoy.

As mentioned in our round-up of TGE from Saturday, the Australian delegation hit upon the best idea to encourage as many people as possible to come down to their showcase in Brighton at Concorde 2, in spite of it being the most out-of-reach location at the festival (it's about a 15 minute walk from the next closest venue). Every year, they put on a barbecue with free food for any of the attendees, so you can gnash down a lovely bit of meat whilst enjoying the music on offer. It might be a move that appeals to humanity's most base instincts, but gosh darn it, it works, for just like in 2014, it convinced me to make the journey down. And whilst the journey down there was worth it for Kim Churchill alone (the artist who was the undoubted highlight of the weekend for me), there was one other Australian artist that I discovered whilst there, and did so under rather familiar circumstances.

Back in 2014, I blogged about Aussie duo Microwave Jenny after striking up a conversation with them whilst queuing up for an Australian taco (a hot dog using a pan loaf instead of a bun). Two years later, I struck up a conversation with an Australian girl whilst the both of us were waiting to get some food. I don't know why it always seems to happen there, I'm guessing it's either because a) I'm an incredibly approachable person (and even more so when I'm wearing my awesome Totoro hoodie), or b) Australians are just the loveliest, friendliest people in the world. Based on experience, It's almost definitely b).

During our conversation, I learned that she was Ella Fence, who had been touring Europe as part of the Australian delegation, and although she wasn't performing at the Aussie BBQ, she had played in Brighton at the Alternative Great Escape on the Thursday. After talking about her music and how her tour was going (she's currently playing live as a three-piece band, although has her heart set on playing with a string section at some point in the future), I agreed to check out her music once I returned home.

Now that I've had a chance to give her music a thorough listen, I can confirm that her music is indeed rather fine. Take "Unknown Water", which was released as a single last years. Produced by Dan Smith, who's also worked with Passenger and Snow Patrol, it is an fine example of epic, cinematic alt-pop in the vein of Florence & The Machine that builds up into a cataclysmic climax.

So if there are any lessons to be taken from this post, it's these:
1) Ella Fence is a great talent
2) Australians are lovely, and
3) Queuing for food offers a great, untapped opportunity to get people interested in your music.

"Unknown Water" is taken from the E.P "Wanderlust", which is out now.

Posted by Christopher McBride at 21:24

Email ThisBlogThis!Share to TwitterShare to FacebookShare to Pinterest
Labels: Australia