Cutaways: Can An Album Be Truly "Lost"? 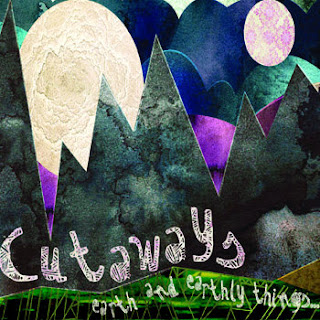 Last month, one of my absolute favourite "personal" music blogs, The Album Wall, carried out a survey in order to get an idea of how people consume music, the results of which make for very interesting, albeit not entirely scientific, reading.

Whilst most of the questions on the survey revolved around questions to build up the data set for the results, there was one question that was asked that was something a bit more personal - "recommend an album that I've never heard before." As someone who spends a great deal of time trying to ram my musical preferences down other people's lugholes, asking this offers a genuine opportunity - not only do I have the option to talk about the music that I love, but the chances are high that they might actually LISTEN to it as well.

The difficult part then was deciding what hitherto unheard album I should recommend to TAW. Should I recommend one of the albums that I love and are well regarded by many people, but might have slipped under their radar, like albums from King Creosote, Japandroids or Eugene McGuinness or should I go for something a little more obtuse, a little bit more obscure, and a little bit more personal to me? In the end, I went for the latter, and recommended "Earth & Earthly Things", a 2009 album from Cutaways.

Cutaways were a band that were really close to my heart whenever I was first getting into local Northern Irish music and independent music. I first saw them live in 2008 when I was helping out at a "pay what you like" gig in The Black Box, and was won over by their angular, stop-start indie-pop with songs like "Lovers Are Lunatics" and "I Spilled Your Drink, So You Broke My Heart". Over the next few years, I ended up seeing them live at least five more times after that, becoming my favourite local band until a certain Derry four-piece came along.

The album "Earth & Earthly Things" received some coverage when it was released, earning favourable comparisons to Los Campesinos! and Dananananaykroyd, being reviewed in The Skinny & the now sadly defunct AU Magazine, as well as receiving a perfect score by The 405 and being named one of their best albums of 2009. I loved it at the time, it resided in my car stereo for quite a while after its release, and I ended up playing almost every song on that record on my show on student radio at the time.

Yet despite enjoying the album, "Earth & Earthly Things" didn't catapult the band to the heightened success that I would have hoped for, and the band eventually called it a day in 2010. However, I didn't let this get me down, for I knew in my heart of hearts that this was a very special album indeed, and that years in the future, as word of mouth spreads and people who were inspired by Cutaways begin forming bands of their own, then the album would be re-evaluated, re-appraised, and within several years it will be held up as a classic record.

Music history is littered with examples of artists who sold next to nothing whilst they were recording, but due to word of mouth and increasing exposure to their work has led to them becoming even more popular years after their initial demise. For starters, there's The Velvet Underground. It's estimated that their debut album sold around 10,000 copies when it was first released, but as that famous quote by Brian Eno goes, "everyone that bought it started a band". That album's now sold more than half a million copies in the USA alone, and songs like "Venus In Furs" and "Sunday Morning" are now regarded as bona fide classics.

There's also Vashti Bunyan, who released her album "Just Another Day" back in 1970. It sold next to nothing on its initial release, and Bunyan effectively retired from music shortly after its release. However, word of mouth over the years increased its reputation, and by the time the album was finally released on CD in 2000 the album was regarded as a classic of the Brit-folk era (with copies allegedly selling for $1,000 according to one source). Reviews of the re-issue were universally glowing, and due to popular demand she eventually released a follow-up album in 2005, more than an entire lifetime after she debuted.

On a most famous yet tragic cases of post-release success was Nick Drake, who released three albums, "Five Leaves Left", "Bryter Layter" and "Pink Moon" with little success, before taking his own life in 1974 at the age of just 26. He reputation grew in stature over the years, with REM & The Cure citing him as influences and being the inspiration behind the global hit "Life In A Northern Town" by Dream Academy. However, it was the use of "Pink Moon" in a Volkswagen advert in 2000 that really cemented him in the popular psyche, with sales of the album increasing by 600% in the direct aftermath of its release.

However, all this got me wondering - in the internet age, is it truly possible for an album or artist to truly become a "lost" classic? In the past, an album could disappear from the public if the album was to go out of print, and if you wanted it to resurface it would take a particularly loyal, dedicated, and most importantly influential champion of the record to bring it back into the public consciousness (normally a musician citing it as an influence, or a major celebrity fan). Nowadays, you don't need to worry about the album being deleted as the joys of the internet mean that one the album is uploaded to the internet just once, then it should stay there forever, so in some way, it will always exist.

Another argument why there's unlikely to be a "lost" classic artist in the internet age is that thanks to its connectivity, it's much easier to find an audience for your music and to retain them. As Tom Robinson mentioned in his BBC Introducing talk in 2013, in the past if you wanted to hear music, your options were severely limited, so finding music that matched your tastes was a lot harder, as there were less opportunities to discover music. Now there's so much music available to listen to at a touch of a button, in every style and every combination imaginable, so if you make any kind of music, there's a chance that there's someone out there that will be able to discover it. Heck, if there's a market for sleeping playlists, there's a market for anything.

Here's one for you - if it wasn't for the early online reviews of "Funeral", would Arcade Fire be the Glastonbury headlining behemoth they are today? Without the internet, would they just be another "cult" band that gets praised to high heavens by those "in the know", but largely ignored by everyone else? I believe so, but the truth is we'll never know. Let me know what you think.

But back to Cutaways. It's now been 7 years since "Earth & Earthly Things" was released. So has my prediction that the band's music would be even more popular years after they split up? Well, if this last.fm graph of their monthly listeners between 2010 to now is anything to go by... 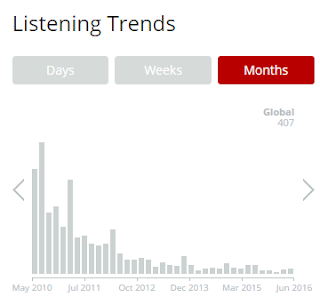 ...it's the exact opposite.

There hasn't been much talk about the band, nor the album, since they split up - a quick Google search doesn't turn up much written about them post-2010. As for opportunities for people to discover them - as the album's not on Spotify, which is perhaps one of the biggest places to discover music at this moment in time, their chances of them receiving post-split fame via that channel remains closed.

However, I still remain hopeful that eventually, Cutaways will receive the recognition that they truly deserved. The album's still available on the internet, and as the band are a nice bunch, they've left it up for anyone who wants it to download for free. And who knows - maybe a music programmer comes across it, falls in love with one of the songs, and uses it in an international ad campaign, bring the band to a global audience through pure commercialism.

And even now, people are warming to Cutaways for the first time. Let's go back to The Album Wall, look at their May playlist, and have a look at the 5th song on the list.

The re-evaluation is beginning.