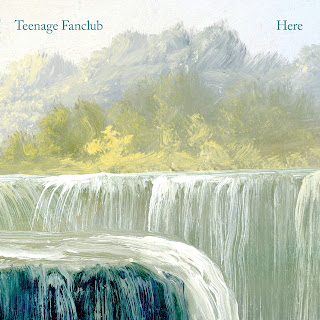 As anyone who has read this blog on a regular basis or follows me on Twitter will know that one of my favourite bands ever is Teenage Fanclub. As far as the rankings go, I put them at #3 on my list of top musicians, although admittedly it's been a while since I've considered my internal band ranking, so I might have to sit down at some point and consider whether there should be any movement (and just so you know, #2 is The Cure, and I don't need to tell you who is at #1).

It's been about six years since the band have released their last album, "Shadows", although the members have been rather busy in the interim period. Norman Blake releasing records as both The New Mendicants and in collaboration with Euros Childs, Jonny. Gerard Love released an album under the name Lightships, whilst Raymond McGinley played guitar for Snowgoose. They reconvened last year to record a new album, and with that on its way in September, they've unleashed the lead single on us.

"I'm In Love" offers a welcome return to the band after their absence. Like most of their post "Songs From Northern Britain" material, it's a lot less noisy and more subdued, yet still has all those qualities that make us love the band - the sunkissed harmonies, the jangly guitars, and that unbridled optimism that shines through. At this point in their career, what you get from a new Teenage Fanclub release is more or less what you expect from it, but of course that doesn't make it any less satisfying.

"Here" will be released on 9th September on CD, vinyl, download & cassette.