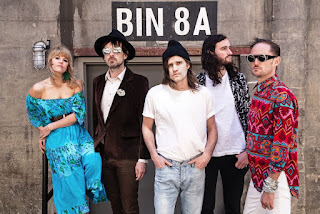 Streets of Laredo are a five-piece indie folk rock band from Brookyn by way for New Zealand. They released their debut album "Volume I & II" a few years ago, a release that admittedly went over or heads when it came out. However, it looks like we've picked a good time to get acquainted with them, as the first song from their sophomore album is a rather great one.

"99.9%" mixes Springsteen-esque lyrical imagery with a driving rock rhythm that mixes horns and electronics rather effortlessly. It also reminds us a little but of a more uptempo Neutral Milk Hotel in parts, which can't be a bad thing at all.

Photo is © Jessie Sara English
Posted by Christopher McBride at 19:47