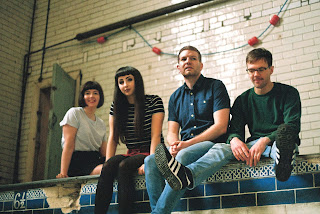 We've featured quite a bit of fuzzy indie-pop on the blog from further afield in the past few days, so it's nice to be able to write about some from a bit closer to home. Hailing from Northern Ireland's north coast, Bad Fit only played their first official gig together a few days ago, although their members have played with a plethora of different local acts over the years, including Vanilla Gloom, Lantern For A Gale & The Salt Flats. One of them was also a contestant on the game show Pointless a few years back, but that's not really relevant to their music, but is still worth mentioning, because Pointless is awesome.

Their debut single, "Strong Forever", is a very promising start for the four-piece, with its honeyed vocals mixed with fuzzy guitars calling to mind not only the indie-pop of Alvvays, but also elements of 90s American alt-rock in the style of Belly.

"Strong Forever" will be released on 27th June.

Posted by Christopher McBride at 17:33