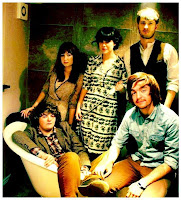 In an episode of The Simpsons from the mid 00s, Homer wears a bracelet with the initials "WWJD" on it, which he claims is his philosophy of life. When Lisa says that it's profound that Homer would wear a bracelet inspiring him to think "What would Jesus do," he is immediately annoyed. "Jesus? I thought it was Geppetto." I have no idea whether this exchange was the inspiration for Derry 5 piece The Jeppetos' name, but I'd like to think that it was.

The band, which centres around the vocals of husband and wife team of Mike & Ruth Aicken, utilizes interesting instruments in the sound to create dynamic soundscapes , with clarinets, the glockenspiel and even a keyboard-flute featuring in their sound. This is most evident on the title track of their most recent E.P "Goldrush." Featuring local legend Duke Special on the piano, the track, which is available as a free download, is a whimsical, quirky folk track that won't let go until you get a warm, fuzzy feeling inside.

"Goldrush" is taken from The Jepettos' debut E.P "Start a New People", which is out now