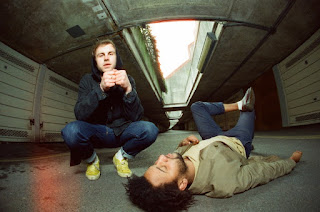 Now here's an unexpected delight from a group that we weren't sure we'd hear from again.

We were first taken in by Birmingham band Superfood back in 2013 when we were taken in by their self-titled single, and having had the chance to catch them live, and having seen the band sign to the respected Infectious Records, we were hopeful that they would be the band that would help lead the Britpop revival. Alas, their debut album "Don't Say That" came and went without much of a fuss in 2014, and having not heard much from them in that time, we'd assumed that the band had fizzled out.

Well, imagine our surprise to learn that not only are Superfood very much a going concern, but there have been many developments, some of which of an exciting nature, within the group. First, the band has paired back to a core duo of Dom Ganderson & Ryan Malcolm. Secondly, the band have signed a record deal with Dirty Hit, the label who have enjoyed success in recent years with The 1975 & Wolf Alice among others.

And lastly, the band have released their first single in three years with "Double Dutch", a song that marks a radical departure for the band. As the song is built around a jump-rope vocal chant sample, you might immediately be prone to comparisons with The Go! Team. However, the group instead use it as the basis for a groove-laden, Balearic-ish tune that may be more suited to a Ministy of Sound Chill-Out compilation album than a Shine one, although the use of guitar still harks back to the Superfood of yore.

Pulling off a re-invention isn't the easiest trick to pull off, but on the strength of "Double Dutch", Superfood appears to have just done it. Whether they can draw in new fans whilst still pleasing their existing ones though will be the big task for them in the next few months.

"Double Dutch" is out now.