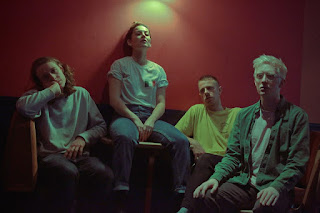 We're well aware at The Metaphorical Boat that many of the artists that we write about on this site don't derive their income solely from their musical exploits (although if we had our way, we would ensure that was the case, but that's another story), and that many of them work in other jobs to either subsidize or pay for the music that they create.

What is less common however is for said artists to put the fact that they work in another career at the front and centre of their musical work. That's what Ed Cares, who outside of music works full time as a nanny, did when he formed the band CHILDCARE. They've released a few singles over the past few years, and have supported Bastille on tour, although it is with their latest single that they've really grabbed us.

"Kiss?" was written after an incident Ed experienced whilst picking up the children he looks after from school, when an attempt to greet one of the waiting mums didn't go exactly the way he planned. The song features a great male/female vocal interplay over a poppy indie-rock beat, a great song about a moment of sheer awkwardness.

"Kiss?" is out now, and the band are due to play at The Great Escape in Brighton in May.

Email ThisBlogThis!Share to TwitterShare to FacebookShare to Pinterest
Labels: indie-rock