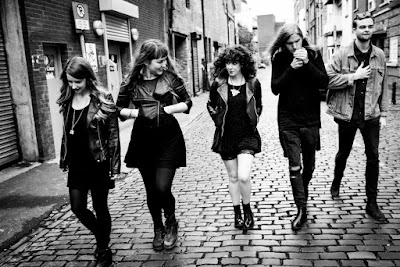 It's been nearly a year since Belfast 5-piece Pleasure Beach first grabbed us by the thingies with their debut single "Go". Now 12 months and with an E,P under their belt, things are looking rather swimtastic for them. They've been streamed a ridiculous amount of times on Soundcloud & the like, and they found themselves on the longlist for the Blog Sound of 2016. They've got a busy schedule over the next few months, with the band seemingly booked for every festival going, including a gig at The Great Escape in Brighton on May 20th (where your humble captain hopes to see them live for the first time, something which is well overdue).

But before all that, the band have just released their first new song of the calendar year, "Magic Mountain". If you've heard Pleasure Beach before, you'll know what you're getting, their sound is a little bit Bruce Springsteen, and quite a bit of The War on Drugs as well.

Which leads to the obvious question, which is that if their sound is so much indebted to those artists, why listen to Pleasure Beach when you can listen to The Boss or WOD instead? It's a question that we've been pondering for some time, but I think we've finally got an answer - joy. There's the old cliché that no-one gets a happy ending in a Bruce Springsteen song, whilst the sound of the War on Drugs tends to be very inwards looking. When you listen to a Pleasure Beach song on the other hand, its extroverted sounds makes you feel like you can take on the world, rather than succumb to it, and there's a feeling of hope within their words, even if it doesn't always appear that way at first. And sometimes that's just what we want from music.

"Magic Mountain" is another strong entry in Pleasure Beach's already strong arsenal of tunes. Let's see what other heights they can climb to for the rest of the year.

"Magic Mountain" will be released on 22nd April.

Posted by Christopher McBride at 21:04