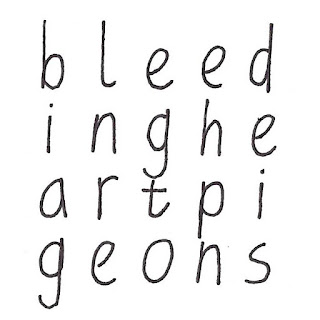 As a music fan, you know that it's the end of another year when you see the 'tip sheets' of various publications coming in thick or fast. Be it the BBC Sound of... poll, the Blog Sound Of... poll (which for the first time this year I was one of the judging panel), or even my very own lists, they act as a good indicator of what musicians are worth keeping an eye on over the next 12 months. Because isn't that smug sense of self-satisfaction you get when you hear someone talking about an artist a few months down the line and you think to yourself "I heard of them back in November!" just wonderful?

In any of these lists, you know that an artist is going to do particularly well when you find the same artists cropping up again and again. The Irish Times recently asked some trendy media people which artists that they are tipping for big things next year. Several of the people asked, including Conor O'Brien of Villagers, came up with an artist whom I hadn't heard of up until now, but one that I've really taken to - Limerick based trio Bleeding Heart Pigeons, and their three-part alternate-rock movement* "Soliloquies, Massacres".

The first part of the movement is "Visiting Myself In Hospital", a track which combines the forceful electronic-rock of These New Puritans with a vocal/guitar aesthetic borrowed from Manic Street Preachers. The second part, "Premeditation", takes on board some of the more intimate sounds of Radiohead, before climaxing with some very Warp-esque bleeps.

This is then followed by the final part, "Catharsis", which suddenly and surprisingly hurtles the music into Vampire Weekend territory for three glorious minutes, before pulling the plug entirely for the final two minutes, stripping the song down to just guitar and vocals.

For a band that are still in their teens, "Soliloquies, Massacres" is an incredibly inventive introduction to Bleeding Heart Pigeons. The band have done the impossible by taking the best bits of some of the most inventive artists of the past twenty years, yet made something both strikingly original and very much their own. Where they can possibly go from here is anybody's guess.

"Soliloquies, Massacres" is out now, with parts II & III available to download for free.

*It's posher than saying E.P.
Posted by Christopher McBride at 14:40