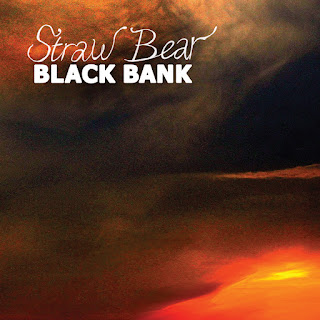 I recently got into a conversation with someone as to whether Mumford & Sons should really be considered a folk band or not. The person I was talking to argued that the sound of the band owes more to American bluegrass music than to the English folk tradition, and therefore should not really be considered to be folk, or 'nu-folk', at all.

This conversation sticks in the mind when it comes to reviewing "Black Bank", the second album by English group Straw Bear. On the surface, "Black Bank" may appear to be a quintessential English folk album. Yet this pigeonholing would be a disservice to their music.

There are some wonderfully folksy tunes on the album, that's for sure. The delicate sound of the album opener, "Kitty" is both wistful and hopeful at the same time, whilst "Quartermaster" is a song that wouldn't seem out of place at Ye Olde Renaissance Faire. However, there are aspects, both musical and lyrical, that give it an edge over other 'folk' artists.

This includes their ability to flesh out characters and situations that you feel empathy for. The titular "Kitty", for example, is described as the "archetypal artist...(who) only creates fantasies of stadium tours and celebrity dates", painting a picture of someone whose critical self-consciousness leaves her unable to reach her full potential.

Sometimes, their lyrical odysseys can be downright bizarre. "Urban Fox", a song that has more than a hint of Blur in it, is a tale about those noisy little critters keeping people awake at night due to their, to use a euphemism, over-activeness. That vocalist Ian Ray can sing about this without corpsing is a testament to his resolve, especially given the "angry Scottish monologue" that occurs halfway through the track. Another track on the record, "Cocker Pug", sees Ray compare himself and others to various breeds of dog over a sunny guitar riff, before settling on a springer spaniel (and definitely not a bulldog).

And then there are the songs that cannot in good conscience be considered folk at all. "Manana" sounds like the song that you would find as the last track on a Britpop compilation CD when the compilers couldn't get the rights to "Smile" by The Supernaturals and needed a less well known track to fill in the space at the end, which would eventually osmosisize into the wider world's psyche. And the closing track, the rocky romp "State of The Nation", sounds like a cross between the garage power of The Hives and the more reflective sound of The Guillemots. It's rare to see a band leave their best song to the very end of an album, but in this case it seems to work rather effectively.

"Black Bank" by Straw Bear is a rather odd beast indeed. It's an album that largely eschews the folk tradition, yet there is something typically British about it. In the end, the best way to describe is probably "Postmodern English folk". It is an album full of quirky gems that seem tailor made for repeat listening.

And by popular demand, this review will end with a pun. If "Black Bank" becomes successful, and artists begin to cite it as influence, does that mean those bands are Straw Bear-y flavoured?

Posted by Christopher McBride at 20:00