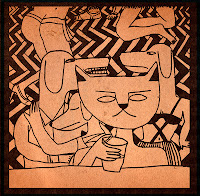 London indie-poppers Tigercats let out one the most unexpectedly strong albums in 2012 when they released the monstrously fun "Isle of Dogs" earlier this year. Following April's "Full Moon Reggae Party", the band are gearing up to release the 2nd single from the album.

"Harper Lee", named after the writer of the insightful novel To Kill a Mockingbird is another dizzy slice of innocent guitar-pop from the group. A rather strange music video, directed by Hefner's Darren Hayman, has been released to promote the single.

"Harper Lee" will be released a double A-side vinyl single along with new track, "Cats Run Free" on July 21st.


Posted by Christopher McBride at 16:46