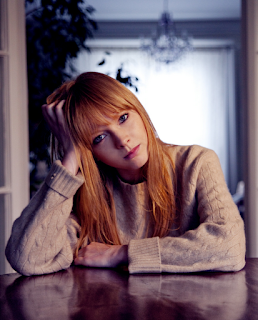 There seems to be a universal rule that if one mentions the wonderful singer/songwriter Lucy Rose, then one must also mention the rather popular indie-rock group that she has supported and occasionally supplies vocals for (a rule that admittedly, I am as likely to adhere to as anyone else). However, there have been two things that have happened recently that give me the feeling that she has just what it takes to step out of their shadow and make a name for herself on her own terms.

Firstly, I had the absolute pleasure of watching her headline in The Black Box in Belfast on Thursday evening. In this intimate venue, the wonder of her songs really shone through. It was an interesting set-up, as she was sitting on a set on a raised podium (which she called her "spaceship"), which in theory, should have allowed the pint sized singer to see the audience whilst sitting down.

However, the Belfast crowd decided that sitting on the floor throughout the set would be the appropriate listening environment, leading to a strange situation where Lucy Rose towered over the audience, as if she were queen and us her loyal subjects. However, given the ecstatic response to her set from the crowd, might not be far from the truth. She is an absolutely wonderful performer, and if you get the chance to see her in an intimate venue make sure you go for it, for she might not be playing in that setting for much longer. Be sure to pick up her homemade jam and tea that she sells at her gigs as well. It's a rather nice treat.

Lucy Rose has also released the video for her upcoming single, "Lines", which will feature on her debut album, released on September 24th. It's an odd, yet endearing beast, with it's shifting drum rhythms, highly textured production, and the incredibly sensual vocals of Ms Rose herself.

"Lines" will be released on July 22nd.

Posted by Christopher McBride at 23:29