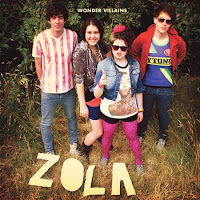 The Wonder Villains are perhaps the greatest pop band that currently ply their trade in on the NI music scene. Having been gigging for over two years now, the band have signed to local label No Dancing, and are gearing up to release their first E.P for them, "Zola," on October 16th.

The three tracks on the E.P showcase what makes the band great: feel good, hook laden, cultural reference infused pop songs that will leave a smile on your face as you hum along to the infectious melodies. The title track of the E.P is dedicated to former Chelsea skipper Gianfranco, and feature, whilst "33" makes reference to lost star Jorge Garcia.

The last track on the album, "Running in Circles", is a bit of an oddity. It originally featured as the b-side of last year's single "SpaceJam", and whilst the version featured here in a re-recorded version, it is still listed as being a demo. It's possible that either the band haven't recorded a version yet that they're truly happy with, or the song is being held back for consideration as a future single, or quite possibly both. Nevertheless, even in this form the track is a fantastic slice of pop-goodness.

If "Zola" is anything to go by, then the future is certainly rosy for The Wonder Villains, as long as they continue to produce such fanastic, feel good material.

Posted by Christopher McBride at 22:06