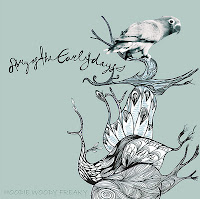 The melding together hip-hop influences with tenderly strummed acoustica has been used by several artists. Ed Sheeran recently hit the top spot of the album chart with his smashing together of the two worlds, and Plan B famously rapped inner city life to the sound of his acostic guitar on his first album (before he sold out and went all blue-eyed soul)

One band that have mixed the two together in an interesting way is Indonesian trio Hoodie Woody Freaky. In the hands of another group, the song "Rain" could've been just your standard singer-songwriter fare. But with Fikri Haikal's beatboxing added to the mix, the song becomes interesting and, dare I say it, fun. Hoodie Woody Freaky are definately doing something different to many bands, and for that they should be applauded.

"Rain" is taken from the group's debut E.P "Story of the Early Days", which is available to download for free.

Posted by Christopher McBride at 23:08

Email ThisBlogThis!Share to TwitterShare to FacebookShare to Pinterest
Labels: hip-hop