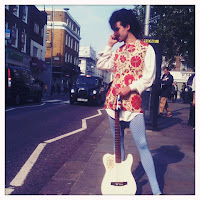 If I was to describe the sound of "Bam Bam" by London based musican King Charles, I would class it as a mixture between Vampire Weekend and Scouting For Girls, based upon it's indie chasing sensibilities and it's unashamedly pop-oriented structure. It's a heavily addictive song, and more capable of inducing an earworm as any other song this year (with the possible exception of "Ricky Dee")

"Bam Bam" will be released on November 28th.