The final day of The Great Escape has drawn to a close, as we leave the better than okay town of Brighton for another year, with all the music that came with it. We saw lots of great music, as well as lots of music that we didn't get around to - as is sometimes the way with TGE, large queues meant that we weren't able to get in to some of the artists we would have liked to see, like Ibibio Sound System, Childcare & Jane Weaver.

But we did get to see lots of great music on Saturday, so here is what we saw, complete with our hastily taken pictures: 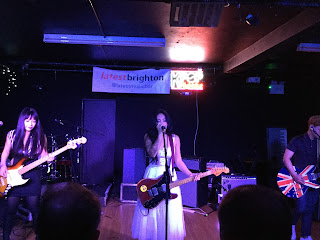 The day was kicked off with some rock music direct from Korea. Really fantastic and surprisingly diverse sounding set of songs, and a really charismatic lead singer who really got the crowd going. Plus they gave me a stuffed toy to mark the Winter Olympics in Korea in 2018, so extra marks for them. Evanescence would perhaps be the closest musical comparison by our reckoning. 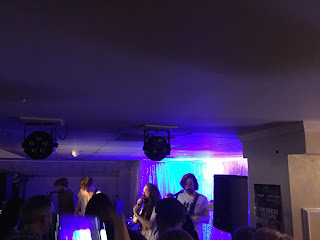 Their lead singer sure is a right old hairy fella. (Note to the band - you have our permission to use that quote in any press releases you send out).

Quite nice tropical infused indie. Quite a big crowd for them in one of the smaller venues. 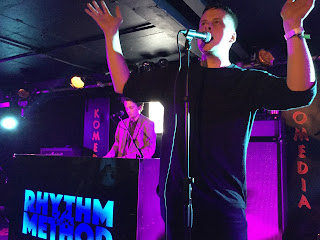 We didn't expect to like The Rhythm Method as much as we did, but we were absolutely blown away by their stagecraft. Fronted by quite possibly the campest hard lad we've ever seen, the duo (plus guest vocalist) put in a blinding set of contemporary sounding, socially deft tunes, like a cross between The Streets and a lower budget Pet Shop Boys. The crowd went bananas for them, and given the positive reception we've heard from others for their set, this could prove to be a breakthrough moment for the band. 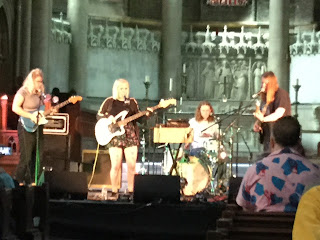 We stumbled across this local band playing in a church right next to the hotel we were staying at. We must say that it was the perfect venue to see the band, for their lo-fi indie-rock stylings sounded incredible with the acoustics offered by the venue - we don't think we've heard drums sound so good before. 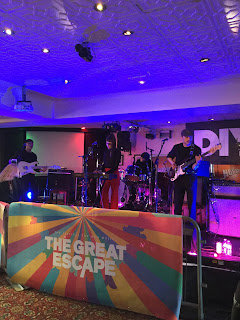 Probably the only band we saw during the weekend that actively bored us. Still, at least it gave us the opportunity to walk all the way to the end of Brighton Pier. You get a lovely view of the sea from there. 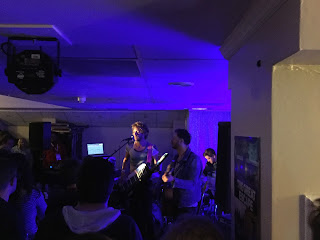 We caught the tail end of the Hungarian band's set. Their tunes were okay, but their lead singer had us all laughing, as he sarcastically joked about how much money and fame they were going to get as a result of playing at The Great Escape, and gently took the proverbial out of their guitarist. 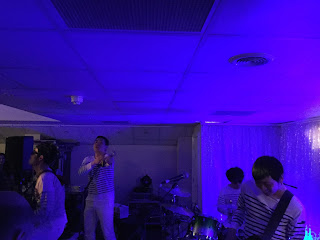 Our second Korean band of the day. The band opened the set joking about their matching outfits ("we were going for The Beach Boys, but ended up like the Backstreet Boys"), and launched into a pretty decent set of rock songs, culminating in an unexpected cover of "Disco 2000". 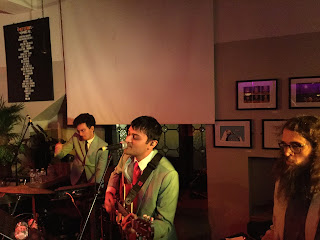 An absolutely lovely set of dreamy pop songs from the dapper Indian band. "Newbury Street" and "Philosophize" were the highlights of a set that was 30 minutes of pure loveliness. 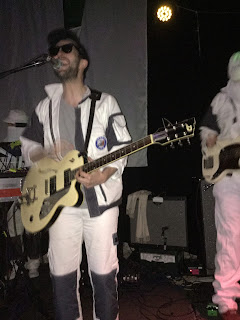 What a way to finish our time at the Great Escape 2017. Dressed like a cross between astronauts in training and paramilitaries, Drones Club put in a blinding set of electronic dance tunes that were part rave, part revolutionary call to arms. "Hurricane" is quickly becoming our favourite song of the year, and the ecstatic reaction of the crowd just showed us exactly why that is. It was definitely the highlight of our festival, and sets Drones Club out as a band that we feel are going to be incredibly important over the next 12 months, in one way or another.
Posted by Christopher McBride at 19:52