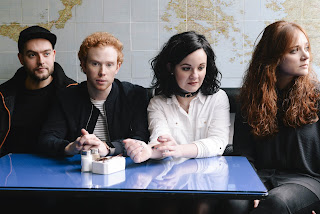 Top tip - if you really want us to really, really like your song, you should call it "Go". At least this is the conclusion that we have reached in the past few years, when we've noticed that we've been dis-proportionally attracted to songs of said name within the past few years. In 2015 no more than THREE songs made our list of top songs of the year, from Chemical Brothers, Public Service Broadcasting and Pleasure Beach. Then in 2016, we added another song to our Go-tastic quiver when M83 blew our little cotton socks off with a similarly named song. And of course, there's been other older songs that we love that are called "Go" as well, such as ones by Delilah & Moby.

We're somewhat at a loss to explain why we're so drawn to songs that are called "Go", aside from the obvious fact that they are all rather awesome songs. If I were to put on my amateur cognitive scientist hat on, I may posit that as the word usually denotes a call to action, when our simple little brain sees the word, we are immediately triggered by our innate survival instinct into taking action. I know that whenever I hear the word 'go', I immediately feel the need to take action, regardless of where I am, and regardless of whether it is being directly addressed to me, and I'm sure it would be the same for you.

In the example of songs called "Go", we are immediately drawn to pressing the play button of a song with this name more than songs with other, less active words attached to them, and by the balance of probabilities, I am more likely to listen to more songs with this word, ergo like more songs that are called "Go". But then again, what do I know? I'm a number-cruncher with a degree in Drama, maybe I'll leave the sciencing to actual scientists.

All that preamble leads us on nicely to the new single from Glasgow quartet Apache Darling. The band have certainly managed to pique our initial interest and trick my simple little brain into hitting play by cleverly titling their single "Go". What made us stick around however, is the fact that it is quite a wonderful song indeed. Written about a prior band break-up, it is a tender yet soaring synth-pop song in the mold of Chvrches or Goldfrapp. A great introduction to a band whom we expect to hear much more from.

"Go" is out now, and will feature on the band's debut E.P, which will be released in the summer.