So Day 2 of The Great Escape has come to its conclusion. Despite it being a much brighter day than day 1, where it rained so much that several streets had to be re-designated as rivers, it was a less intensive day in terms of who we went to see. Still, it gave us the opportunity to explore several acts whom we were unfamiliar with before the festival began. And here they are, alongside our hastily taken photos of each act - 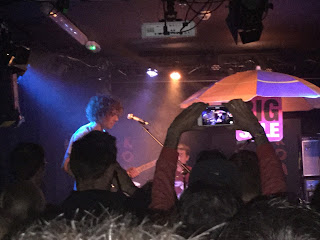 Kicking off the day with some Swiss psychedelic-rock. Quite War on Drugs-y, if that's your type of thing. 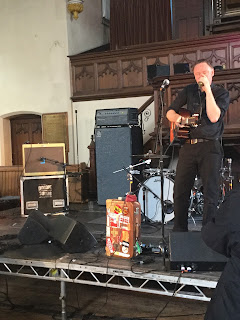 This New Zealander was a bit of a surprise. Delaney Davidson appears to be the Antipodes' version of Tom Waits, with his blues-rock sound, grizzled, gin-soaked vocals and tales of lust and murder. It was interesting to see a loop pedal being used to create that sort of throwback blues-rock, which isn't something we've seen in the live arena before. Top marks for using an antique microphone to nonetheless recreate that antiquated sound. 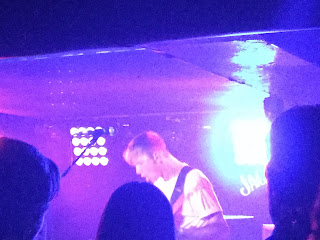 Belgian electroclash. Some nice noises, but nothing that really grabbed us... 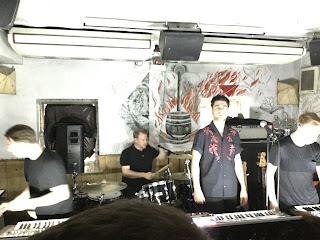 ...for straight afterwards, we witnessed the true kings of Belgian dance-punk, Goose.

It was surprising to see the veteran band play at The Alternative Escape, and at such a small venue, but their set was nonetheless impeccable. Really great songs, and a quite subdued yet effective lighting arrangement too. Will have to dig into the band deeper as a result. 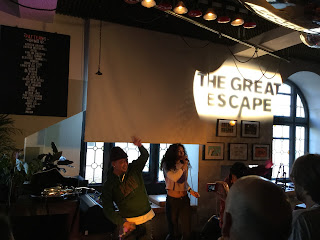 At a festival like The Great Escape, we do think it's a good idea to dip your toe into musicians in a genre that you may not exactly enjoy, for if there's one place you're likely to find some of the most exciting practitioners of each genre, it's at The Great Escape.

We're not the biggest fan of hip-hop, but we thought that we'd take a change of The Age of L.U.N.A on the recommendation of another music blogger. Although they weren't really our cup of tea, there were many things to like about them - the production on their songs is quite strong, we did enjoy their mash-up/shprt mixtape of hip-hop classics like "Ready or Not" and "Ghetto Superstar", plus we must give top marks for any rap group that plays live sax of stage. 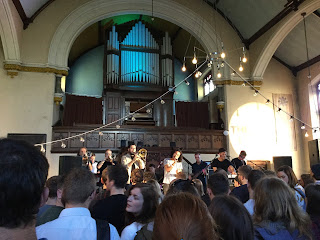 We definitely didn't think that we'd be treated to Canadian brassy-funk in a church at The Great Escape, but treated we were. The packed out crowd really enjoyed the performance, with much dancing and arse-slapping (?) abound. 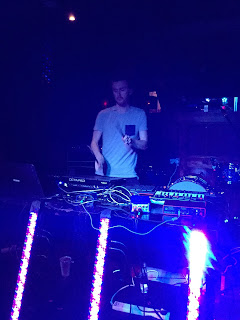 We discovered last minute that the artist responsible for making one of our favourite songs of 2016, Draper, was playing. The set from the electronic artist saw him adding live synthetic percussion to his pre-recorded tracks, with lights synchronized to the performance. Great songs, wish it felt a little bit more live though.
Posted by Christopher McBride at 10:04