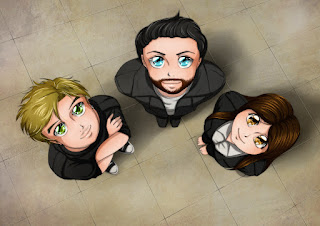 Secondly, having steadily built up a small cache of tunes over the last few years, the band finally compiled the best of them into their debut album, "YO!", which was released in April. We didn't review it when it came out as we would have liked to have done, but we'd like to say that although it doesn't vary its formula that often over its 12-tracks, it still remains a highly enjoyable album of straight to the point, lo-fi pop-rock numbers, and one we very much expect to be in our top albums come year end. Our picks from the album would be "One Potato Two" (which is one of the songs we use when we're trying out new headphones, fact fans) and "Bubblegum". At the moment, "YO!" only seems to be available to buy from their Bandcamp page on a pay-what-you-like basis, but we're hoping that it gets a physical release at some point in the future.

But perhaps the most interesting piece of news to come from the band is that they are going to be touring Japan in November. They've picked up a bit of radio play over there, and as a result they're going to be playing three dates in Tokyo, Osaka and Kyoto. Given that their band name is Japanese, and given that their Facebook feed seems to be filled with anime pictures (and their profile artwork is similarly inspired), it's fair to say that they're going to have an absolute ball there.

Ahead of those dates, the band are released a new E.P of songs which we recorded over the summer. They have released the title track from the release, and fittingly enough, it takes its title from the Japanese word for 'cute'. "Stay Kawaii" sees the band continue its Weezer-esque mix of pop melodies and heavy guitars in a delicious fashion. It's fair to say that Japan's going to love it.

Posted by Christopher McBride at 21:25

Email ThisBlogThis!Share to TwitterShare to FacebookShare to Pinterest
Labels: Isle of Wight, rock