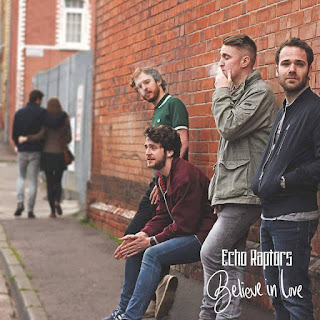 For nearly four years now, Belfast 4-piece Echo Raptors have been Northern Ireland's leading purveyors of Britpop inflected rock tunes. And in that time, it's fair to say that some of its luminaries have set up and take notice. The band supported The Charlatans a few years back, and are going to be supporting the fabulous Cast when they play Belfast in October. We're still a bit peeved that Suede didn't get them as support when they played Belsonic in 2013, but hey, you can't have it all.

They've been rather quiet of late in terms of recording new music, which is why it's great to have a new song from them. "Believe In Love" is a more laid back effort from them, with acoustic guitars playing a more prominant part than in previous singles, calling to mind some of Oasis' more stripped back songs, and rather aptly, a little bit of Cast as well.

"Believe In Love" is out now. The band play Limelight in Belfast on October 9th in support of Cast.

Posted by Christopher McBride at 20:05