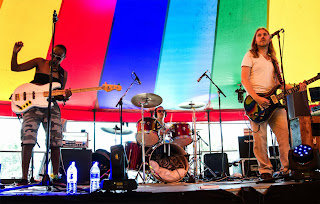 When we featured Melt Yourself Down among our Top Albums of 2013, we mentioned feeling like the band were the first act in a whole new movement of music, given that their multi-cultural, all-encompassing style cannot be easily categorised. Although that's not to say people haven't tried to tag them alongside others already, as evidenced by a compilation called "Yes Wave" (described as "the soulful clatter of artistry and community convening and conspiring..."), alongside acts like Superhuman Happiness & Hello Skinny.

This brings us on to London based trio Lifecycle, a band who seem to tread a similar line of all-encompassing music. A self-described alternative tribal fusion band, their new single "Patterns" sees them mix unconventional world-beat rhythms with jazzy bass and slight hints of rock to create something kaleidoscopic, esoteric and wonderful in equal doses. It's not going to be to everyone's tastes, but its a great little adventure of a tune if you're willing to give it a shot.

"Patterns" is out now, coupled with b-side "Lose Control".

Posted by Christopher McBride at 14:12